I’m nearly two months into a year long trip and still have not processed what happened the last four months. I sold my condo in Seattle, Washington, quit my job, sold my car, and donated almost all of my furniture, art, and clothes to three different non-profits. Some people have told me I’m crazy, some want to live vicariously through me, and some wished they had done the same earlier in their life. A couple people actually said they were excited just to know somebody who is traveling the world. My original plan was to take a road trip from Seattle to Santa Fe, New Mexico stopping at most of the National Parks on the way, then I was going to sell my car and move to Maui for the winter. That plan quickly changed into a visit family and friends in the United States before heading to Europe and Africa with the chance that I may continue east to Australia before settling down in South Korea where I would teach english. The Jezzy Wally world tour started in Cleveland, Ohio (where else would one start a world tour?) then went to NYC, Sweden, France, and Italy where I currently am. I have a flight booked to go to Zanzibar, Tanzania a week from today.

I truly think this trip was meant to be. I had thought about leaving Seattle the last couple years, earning a living in the non-profit sector in Seattle was starting to become unsustainable as everything is very expensive (NYC & Sweden are comparable to current Seattle prices and Seattle continues to rise), and although I have a master degree in Public Administration and 10 years of non-profit experience the job market was still too competitive to move up anywhere. Real friends in Seattle are hard to come by (Google Seattle Freeze), I’m 36 years old and don’t have a partner or child, and I hated the new job I had just started. I said fuck it and got rid of everything I own and am traveling the world for a year.

Many people have asked if it was hard to get rid of everything I own except what fits into the two bags I have with me. The answer to that is hell yes! When I initially moved to Seattle from Cleveland I only took what could fit in my car. Only after buying a small two bedroom condo 5.5 years ago I started acquiring things that were hard to part with. I had over 80 pieces of art, brand new modern furnishings, and very nice everything in the kitchen. Yes it was hard to part with everything, but once the process started it snowballed. I also had a hard deadline in place as the apartment I was leasing was set to expire and I had booked a flight out of town.

I spent July 4th weekend cleaning and staining the deck at my condo (it was on the first floor and had a 500 square foot fenced in area), buying starter plants, grass plants, herbs, and soil to stage three garden beds. I also checked the tenants out that were living in my place and painted and fixed things that had broken. The condo was listed July 7th and my lease expired August 31st. In less than two months I got rid of everything I owned, planned the trip, got vaccinations for the trip, bought things for the trip, and started booking flights. As I mentioned at the beginning of this post I haven’t had time to stop and think about what has happened the last four months. I’m spending an extra night in Siena, Italy right now just to relax and stay in (I climbed up a bell tower before eating breakfast this morning so it’s not exactly working). The morning I left Seattle a friend came over to pick up a full length mirror. I was still getting rid of things the day I left. At one point I thought I would run out of time, but I didn’t. I got rid of the last thing I owned two hours before my brother picked me up to take me to the airport.

What does one take with them to travel the world for a year? I have one large backpack for clothes, toiletries, and miscellaneous things, and one medium size suitcase for my camera equipment and laptop. I have 14 t-shirts, 14 pairs of boxers, 12 pairs of socks, one pair of jeans, one pair of shorts, one long sleeve button down shirt, two shirts and a pair of pants and shorts for African Safaris (color specific to keep the mosquitoes away from you), one pair of swimming trunks, one pair of tennis shoes, one pair of Keens (water proof sandals), a hat, two bandanas, a mosquito net, a tent, and plastic ziploc bags.

My bag situation was stressful, actually. I had a roller suitcase and an over night bag which I eventually purged onto my brother and buddy. I bought new camera equipment which I had shipped to Cleveland because it may not had made it to Seattle on time. Two of the bags that came in the shipment didn’t work well with what I had so I had to go to a camera store in Cleveland and buy two more bags. And I bought the backpack I’m lugging around right now at REI in Seattle before leaving. I’m just now getting comfortable with my bag situation after 1.5 months. This process was much more difficult than I had anticipated. I’m very comfortable with what I have today, but to get to this point proved challenging. 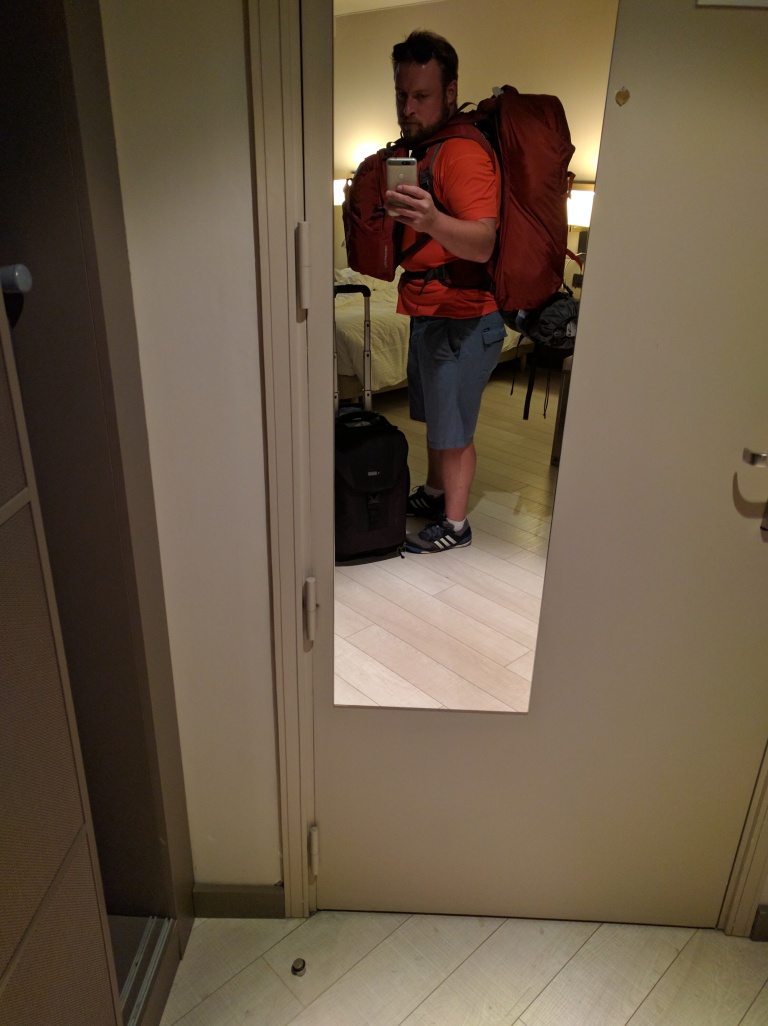 Tomorrow I leave for Rome and a week later I fly to Tanzania to go snorkeling in the Indian Ocean and take pictures of wildlife. I’ve been looking forward to getting to Africa since I started planning the trip. Fingers crossed I don’t get malaria.