After paying and settling into my place I went downstairs to meet the guy I shared a taxi with. While I was upstairs he met a couple people in front of the building. The female lived upstairs and was getting a PhD in English and the guy he met looks like Pitbull the rapper. Pitbull turned out being our morning time driver the next couple days. The female was in her upper 20’s, cute, and the sociopath had his eye on her. He offered to pay her $20 CUC a day to be our translator which she accepted. $20 CUC is double what the monthly minimum wage is in Cuba. PhD, sociopath, and I got into Pitbull’s car and away we went.

Pitbull dropped us and we gave him $5 CUC for the lift. The three of us popped into Hotel Riviera and had a couple beers. For the most part there are two choices of beer in Cuba: Bucanero and Cristal. And if you can find a really cold beer you’re in luck and you should probably stay wherever you are for a while. Most beer in Cuba is not very cold. I didn’t particularly care for either beer. 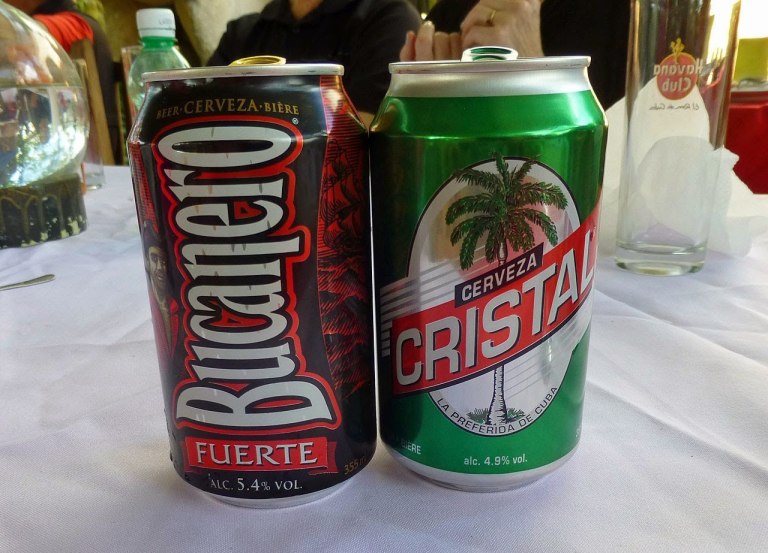 After having a few beers we started walking then stopped at a restaurant to share a pizza. After eating we decided it would be fun to rent an old classic car, drive along the Malecon, and end up in Old Havana. 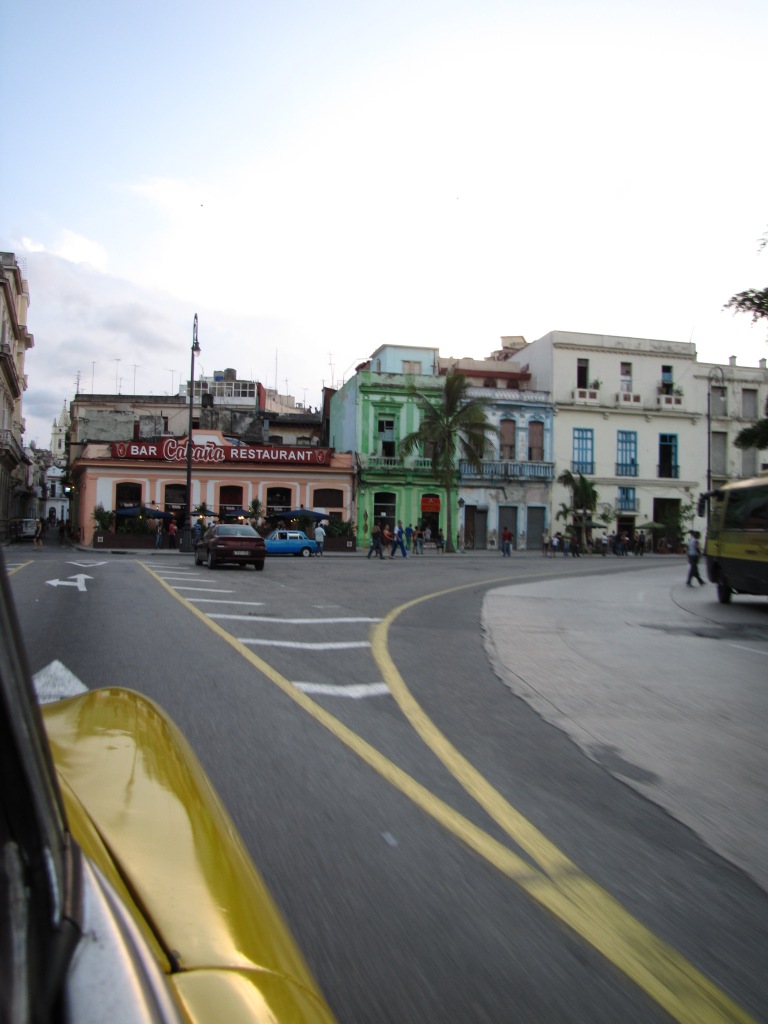 Driving in an old classic car was kind of cool. The sociopath was trying to impress PhD so he paid for it which was nice. Old Havana looks exactly like it does in all the pictures you have seen. Everything around you is decaying and falling apart. Old Havana has lots of character and is full of characters as well. Everywhere you go people ask you where you’re from, ask you if you want to buy cigars, and ask you if you need a taxi. You need a taxi my friend? Taxi, taxi, taxi. Cigars amigo, real cheap. The best cigar I smoked in Cuba cost me $8 CUC at a really nice cigar shop. Never buy cigars off the street even if you think you’re getting a good deal. It feels good when you’re doing it, but when you go to light it and it’s rolled too tight to smoke, that’s when you know they got you. Spare yourself the headache and go to a cigar shop to buy them.

Next we went to Bodeguita Del Medio which is one of the many old watering holes where Ernest Hemmingway used to hangout. It also lays claim to being the birthplace of the mojito. All the walls are covered in photos of VIP customers from the past as well as customers writing on the wall. We went upstairs for a mojito where there was a salsa band playing. After finishing our cocktail we walked around Old Havana.

Next we walked through the Plaza de la Catedral where we saw a Santeria reading tarots cards. Santeria loosely translate as devotion to saints. Santeria has its roots in the Yoruba people of West Africa. The slave trade brought many people to Cuba, other countries in the Caribbean, Latin America, and the United States. Santeria was practiced behind closed doors secretly as a way to avoid religious persecution or the negative social stigma attached to the Afro-Cuban culture in general.

I’m not a huge believer in tarot card readings, but I like the stories and buy into it somewhat. I had my cards read and will have a rich life while traveling often with many adventures. She said I will die when I’m 97. Some people think I’m a fool and that I need to forget about what’s happened in the past. I had a psychic reading done in Seattle three days ago and she said some people think I’m a fool also. She said that in a previous life I was a court jester in Italy. Not for the king, but for a high ranking nobleman. Towards the end of the tarot card reading the sociopath chimed in and said I’ve got two more minutes. I thought that was weird.

Sociopath decided he wanted to rent a horse carriage to try to impress PhD. So we took a horse carriage back towards the building PhD lived in and where I was staying. We went as far as the driver wanted to take his horses and got dropped off near the Malecon. After grabbing a taxi I wanted to get some bottled water before going back to my room. We stopped at six or seven different stores and restaurants before finding a place that had bottled water. Never ever go home at night without bottled water in your room in Cuba. Like other things you would like to get in Cuba, it can be challenging to find at times.

My last night in Playa Del Carmen, Mexico, I met some guys who were going to Havana the same day as me for a bachelor party, but on a different flight. When I got back to my room I tried calling one of them who had a Cuban cell phone. There was no answer and no way to leave a voicemail. I also tried calling a graffiti artist, Yulier P-15, I read about online. He did an interview with a newspaper and said he was running out of art supplies. I tried calling him, but couldn’t get through. I didn’t even know if I was dialing the number correctly. It seemed like every phone number I was given had a different amount of numbers in them or seemed to be written wrong. The cord that came out of the phone to plug into the wall kept falling out of the back of the phone. Calling people in Cuba was wicked fucking frustrating the entire trip. Even Cuban people had trouble calling the people whose phone numbers I had. The shit just don’t work all the time.

I took a nap, woke up, and decided to go grab a beer somewhere. I walked a couple blocks towards the Malecon and stumbled upon an outdoor bar/restaurant. There was a counter next door that sold smokes so I bought some. I grabbed a table and ordered a beer. I didn’t have a lighter or matches and the counter where I bought the cigarettes didn’t have them for sale. Fire is hard to come by in Cuba. Most people light their cigarettes with the cherry of other people’s cigarette. All kinds of things we take for granted are scare over there such as using a toilet for free at an establishment where we are spending money. I had to give some coins to the person who cleaned the toilets at this bar in order to use it. A day or two later it was red. And this was really clean, actually. Good luck, ladies. 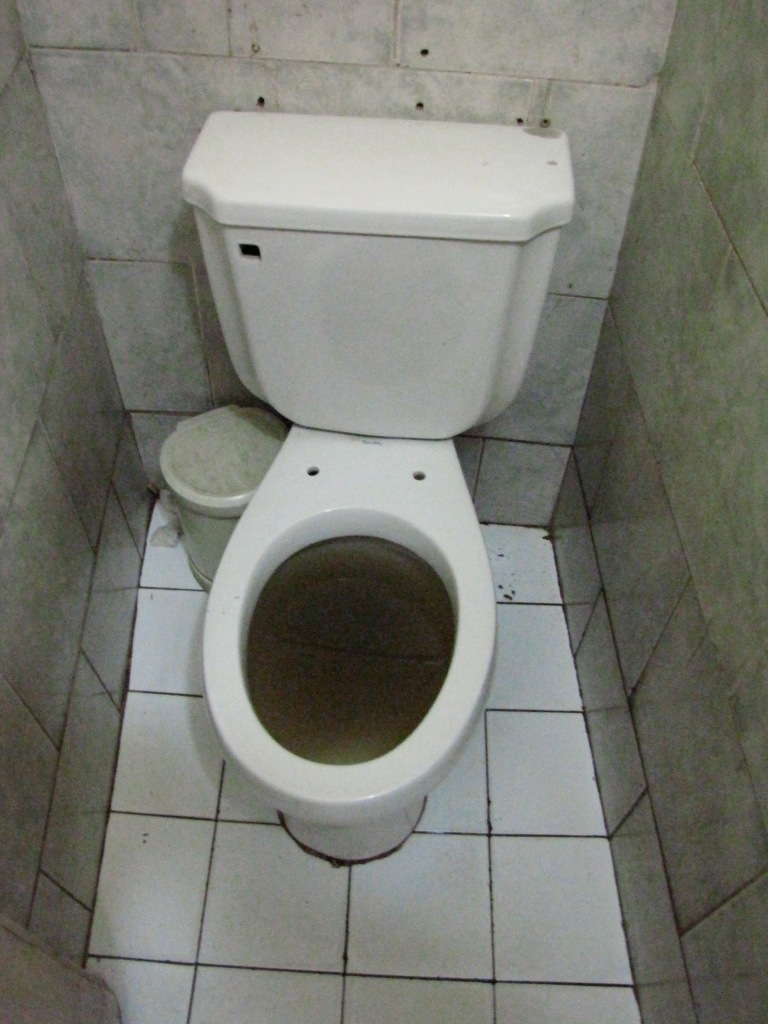 A young man named David sat down at my table with me and we started talking. David said he used to have a job in economics but got laid off. I bought David a beer. He and I ended up having several beers together. Eventually his friend Laura came over and sat with us. Laura ended up being one of the most beautiful women I saw during my trip to Cuba. She was wearing a white tight mini skirt with a matching halter top, and high heels. She also ended up being a prostitute. Laura said she wanted to take me back to my room for $60 CUC. We each had another drink, I paid the tab, and then I went home alone. When I got back to the building I was staying at, PhD was outside kissing a guy who appeared to be her boyfriend. I went upstairs, wrote in my journal, and went to bed. This was the end of my first day in Cuba.