I planned on visiting a buddy working in the Yucatan Peninsula in Mexico. After looking at a map I noticed Cuba was right there so I decided to go to Cuba also. I flew in and out of the Cancun Airport. How did I book a flight from Cancun, Mexico to Havana, Cuba? It was a little complicated. I tried booking it online through Aero Mexico, but that didn’t work. I called Aero Mexico in Texas and they told me I would need to call the branch in Mexico City. The customer service representatives in Mexico City only speak Spanish. I don’t speak Spanish so I asked my brother who is fluent to call to book the flight for me (thanks, Mickey!). Luckily, Aero Mexico had just started accepting Visa and MasterCard cards from the United States for flights to Cuba a couple days prior to calling. They had already been accepting American Express.

When I got to the airport in Cancun to fly to Havana, I paid $25USD for a Cuban Visa. Somebody else on the plane was asked to pay in Mexican Pesos. When leaving Cuba, I expected to pay $29CUC (the Cuban tourist currency), but that cost was included in the price of my flight. Be sure to ask if the cost of a Cuban Visa and/or exit fee is included in the price of your flight.

Before leaving for my trip I read that you need to bring proof that you have health insurance as well as details of your coverage abroad. If you don’t have health insurance, I read they will charge you $4USD per day. I do not know if this is accurate or not. Many things you read about Cuba are not up to date or true. I called my health insurance company and they were familiar with the paperwork that was needed. I also read that you need to bring a list of the medication(s) you are bringing into the country and the reason why you are taking them. In addition to that, and I only read this in one place, you need to bring proof that you are HIV/AIDS free. I do not think the HIV/AIDS piece is true. Nonetheless, I brought a letter anyway.

When I arrived to customs in the Jose Marti International Airport in Havana I was only asked for proof of health insurance. One couple I later met in my trip who flew into a different city was not asked for proof of health insurance. Everywhere you go in Cuba people do things differently. As a citizen of the United States they stamped my Cuban Visa (one small square piece of paper) and not my passport. It is highly suggested that you make a photo copy or two of your Cuban Visa in case you lose the original as well as if you want a copy of your Cuban passport stamp as a souvenir.

After walking through customs you realize that almost all airport employees are young attractive women with short skirts wearing either fashionable leggings or fishnets. After getting your luggage, there is one last stop you make to get out into the airport. The young ladies take a look at your luggage stickers to make sure the bags you have belong to you. I filled out an International Embarkation & Debarkation form on the plane, but nobody ever asked for it. I found this picture online after typing in employees cuba airport… 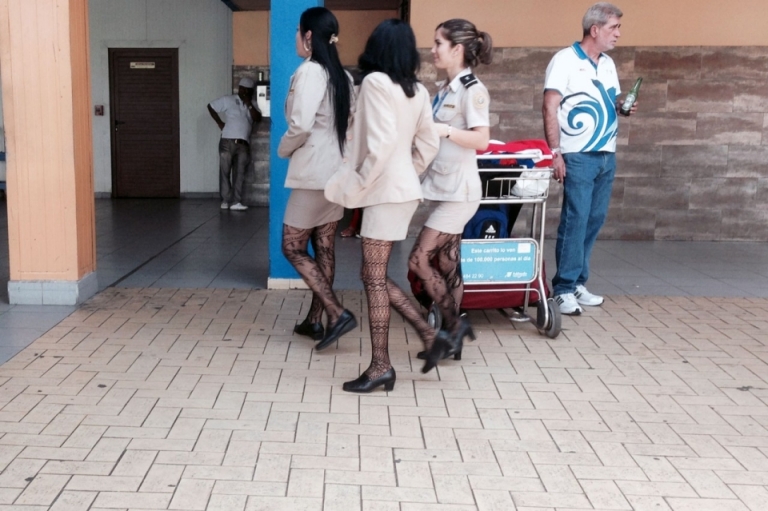 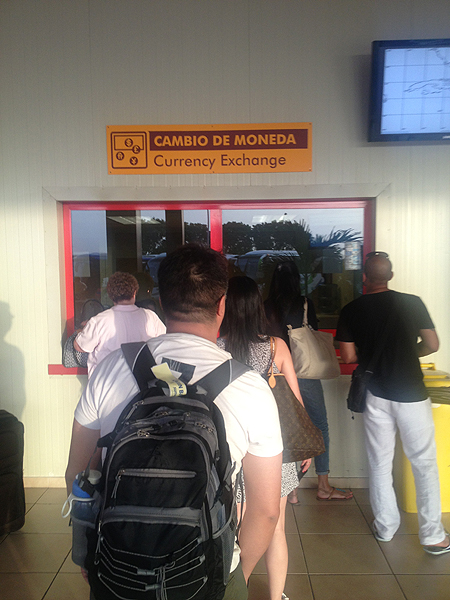 Back in the United States, I booked a domestic flight within Cuba from Havana to Baracoa online with no problem. If you are from the United States you will need to check a box stating the legal reason you are traveling to Cuba before purchasing the flight.  You can find the list of 12 legal ways to travel to Cuba here……http://www.ecfr.gov/cgi-bin/retrieveECFR?gp=&SID=f40f40e5f0f16ff53615e86221f7edd0&mc=true&r=SECTION&n=se31.3.515_1572

My flight from Havana to Baracoa was scheduled to leave at 6:45am on a Sunday morning. Not the best time to leave if you plan on partying late Saturday night, or getting 1.5 hours of sleep after drinking all day and night, but there are only one or two flights to and from Baracoa per week and sometimes they are cancelled. My cabby buddy, per suggestion, picked me up two hours and fifteen minutes before my flight was scheduled to leave. I got there way too early.

My flight was delayed two hours which is apparently a normal occurrence in Cuba. Once there, you cannot pass through security. You can’t even check your bags and get your ticket. You wait in a room full of people where there are flies all around you and chairs are missing the cushion part you sit on. You get to check in when they decide they are ready to check you in. If you walk outside there’s a food stand down a little ways where you can buy cigarettes, rum, and ham and cheese sandwiches.

An excerpt from the journal I kept in Cuba while at the domestic airport in Havana…..This airport is a shit hole. It’s hot, dirty, and there’s no toilet paper. Wherever I read I needed to bring T.P. and hand sanitizer, I love that person…..I haven’t even got in line and it’s already a pain in the ass. I must have been hammered last night. I didn’t finish my rum at the bar at the hotel……It’s now 7:30 and I’m getting in line.

After checking my bags I didn’t really know where to go next. I just kind of made my way through multiple doors until I saw people that were in the line with me while checking in. And once I got there it still didn’t feel right. There was a booth which faced to the left and a had a fairly skinny entrance in front of it. There was a women inside which you could barely see. I asked her if this was the way to Baracoa which it was. This is where I gave her my ticket and I passed through.

Next was security which was the most lax I’ve ever experienced. Security joked with me while a stewardess 25 years my senior flirted with me. Security took the cigars out of my luggage where the flight attendant smelled them and told me how good they were (they weren’t). Then she told me she’d see me in Baracoa. There were women in their 70’s in Cuba who made kissy faces at me and called me papi. Randy old Cuban women are funny.

Eventually I found the gate for my flight. We walked out onto the tarmac and boarded the plane. Thankfully it was not an old Russian plane from the 1950’s. I had read that a domestic flight in Cuba went down the year before and it was an old Russian plane. The guy sitting next to me was a plane buff and said it was a French/Italian plane from the 1980’s. 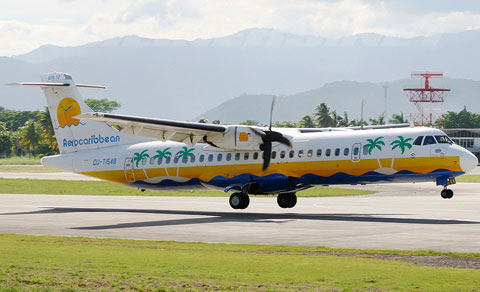 Baracoa airport is very small and the land that surrounds it is gorgeous. The last 20-30 minutes of the flight the pilot lowers the plane and you fly right above turquoise water next to the shore of black sand and never ending palm trees. 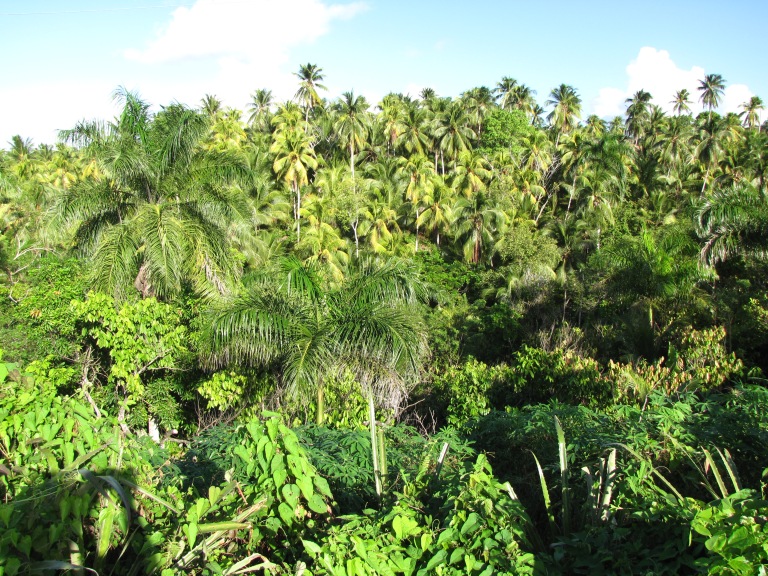 There are only a couple of flights in and out of the airport each week. A couple I met from Israel was supposed to fly out of Baracoa, but their flight was cancelled because the plane was in the Dominican Republic for maintenance. They ended up having to drive across the country with a guy from Germany who ran out of money and his flight home was leaving later that day. Needless to say he didn’t make his flight because Havana is a 16+ hour drive and the roads are so bad you can’t drive at night.

The International Terminal at Jose Marti Airport in Havana when flying back to Cancun was an absolute madhouse. There were three television monitors that said Aero Mexico. One was for first class/member type folks and the other two didn’t say what city was the destination. One line was all the way to the door I got dropped off at and the other line had one person in it. I went into the line with one person in it. The person at the counter told me I was supposed to be in the long line. After talking to people in line it appeared there were two different flight to Cancun and one to Mexico City. There was one line for three different flights. Fucking Cuba. Eventually they allowed the people on my flight to check in at the counter where zero people were previously in line.

I had waited in line to check in for about an hour. I had about 40 minutes until my flight left. I had some Cuban money I needed to exchange (I doubt you can exchange CUC anywhere else in the world) so I walked passed customs and stood in the currency exchange line. I got nervous as lots of people were in line to get through customs and security. I ended up skipping the currency exchange and joined the rugby scrum of people waiting for customs.

I have never seen anything like this before. There was no order. There were no dividers forming single file lines. It was a free for all. There were hundreds of people vying to get in front of one of the seven customs agents. It was mayhem. Some people waited patiently, some yelled and cussed at others, and some elbowed their way to the front. One woman with her young daughter had two dogs in cages and skipped to the front of the line. People behind her yelled and cussed at her which inevitably made her daughter start crying. It was hot, people were sweating, some had luggage with them. Customs agents wouldn’t take entire families at a time so some got split up as other people cut in front of them.

I eventually got through one hour and twenty minutes later, 40 minutes after my flight was supposed to take off. Thankfully they held it and the guy who took my ticket at the gate traded me dollars for CUC. I read somewhere that you can pay $25CUC to skip the line. If that is true I highly suggest it.

2 thoughts on “Cuba – Booking Your Flight, Airports, Need to Know”